The Cabinet Committee on Economic Affairs, chaired by Prime Minister Shri Narendra Modi, has given its approval for continuation of the process of recapitalization of Regional Rural Banks (RRBs) by providing minimum regulatory capital to RRBs for another year beyond 2019-20. 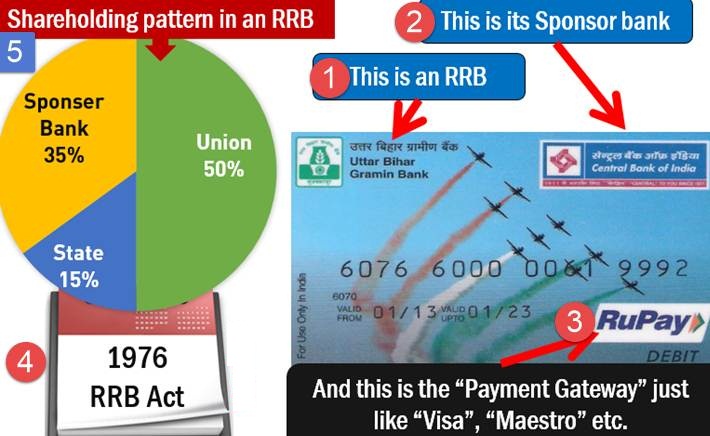 This recapitalization drive which will run for up to 2020-21 for those RRBs which are unable to maintain minimum Capital to Risk weighted Assets Ratio (CRAR) of 9%, as per the regulatory norms prescribed by the Reserve Bank of India.

HOW IT WILL HELP?

A financially stronger and robust Regional Rural Banks with improved CRAR will enable them to meet the credit requirement in the rural areas.


According to the RBI guidelines, the RRBs have to provide 75% of their total credit under PSL (Priority Sector Lending). RRBs are primarily catering to the credit and banking requirements of agriculture sector and rural areas with focus on small and marginal farmers, micro & small enterprises, rural artisans and weaker sections of the society.


In addition, RRBs also provide lending to micro/small enterprises and small entrepreneurs in rural areas. With the recapitalization support to augment CRAR, RRBs would be able to continue their lending to these categories of borrowers under their PSL target, and thus, continue to support rural livelihoods.

Consequent upon decision of the RBI to introduce disclosure norms for Capital to Risk Weighted Assets Ratio (CRAR) of RRBs w.e.f March 2008, a committee was set up under the Chairmanship of Dr. K.C. Chakrabarty.


Based on the recommendation of the Committee, a Scheme for Recapitalization of RRBs was approved by the Cabinet in its meeting held on 10th February, 2011 in order to provide recapitalization support of Rs. 2,200 crore to 40 RRBs with an additional amount of Rs. 700 crore as contingency fund to meet the requirement of the weak RRBs, particularly in the North Eastern and Eastern Region. Therefore, based on the CRAR position of RRBs, as on 31st March of every year, National Bank for Agriculture and Rural Development (NABARD) identifies those RRBs, which require recapitalisation assistance to maintain the mandatory CRAR of 9%.


During this period, Government has also taken various initiatives for making the RRBs economically viable and sustainable institutions. With a view to enable RRBs to minimize their overhead expenses, optimize the use of technology, enhance the capital base and area of operation and increase their exposure, the Government has initiated structural consolidation of RRBs in three phase, thereby reducing the number of RRBs from 196 in 2005 to the present 45.

WHAT ARE REGIONAL RURAL BANKS (RRBs)?

PURPOSE: They have been created with a view of serving primarily the rural areas of India with basic banking and financial services.

COVERAGE: The area of operation of RRBs is limited to the area as notified by Government of India covering one or more districts in the State.

FORMATION: Established under the provisions of an Ordinance passed on 26 September 1975 and the RRB Act 1976 in order to provide sufficient banking and credit facility for agriculture and other rural sectors. As a result, 5 Regional Rural Banks were set up on 2 October 1975 on the recommendations of The Narshimham committee Working Group during the tenure of Indira Gandhi’s Government. First RRB,the Prathama Bank with its Head Office at Moradabad (U.P.) with authorised capital of Rs 5 crore at its starting was set up and it was sponsored by Syndicate Bank.

AMALGAMATION: Currently, RRB’s are going through a process of amalgamation and consolidation.
LEGAL EXISTENCE AND PROTECTION: RRB are recognized by the law and they have legal significance as per the Regional Rural Banks Act, 1976 Act No. 21 Of 1976.